I’ve wanted a Gibson SG since my ‘teens when an obsession with classic rock and modern rock with heavy classic influences meant the sound of an SG blasting from my stereo wasn’t at all uncommon. But why buy one factory fresh and get straight to playing when the process of building one yourself is more challenging and time-consuming, yet more rewarding and a heck of a lot cheaper?

Herein then and SG built with a mahogany body and neck, flamed maple veneer and an Ebony fingerboard with square inlays. Classic SG styling and arrangement of humbucking pickups, finished with chrome hardware. Black on the back blending into blue up-front, with an oil finish to show off the grain of the wood to the eye and touch.

Shaping a guitar body is relatively complex, requiring woodworking skill, a great deal of patience and a workshop of tooling at your disposal to do so effectively. Those wishing to build an SG (or one of a huge range of other designs) but not blessed with any or all of the above can purchase a kit from Coban Guitars, a UK-based supplier of DIY kits at surprisingly affordable prices. The quality is a cut above the typical DIY kit, with genuine woods used and finished to a high standard.

This guitar started life as a Coban kit, and it won’t be the last of their kits that I build. The quality of the materials and workmanship is excellent and cuts the build time in half. The kit arrives as a sanded body, shaped and pre-fretted neck with unshaped headstock and a bag of hardware. Eeverything required to make a playable guitar is included besides the finish and tools; even including a few picks, strings and a lead.

The body is pre-routed and pre-drilled down to the strap holes, and the electronics are pre-soldered with plug connectors on the pickup leads. The sanding and shaping is of a high standard and the parts aren’t bad at all either. Aside from the tuners anyway, which have wobbly pegs and poor tuning stability. After some light playing they were relegated to the spare parts bin and something better installed in their place.

You get a choice of gold or Chrome fittings. The bridge system is nicely made and the pickups aren’t bad at all, though I ultimately upgraded to something better while I was swapping the tuners. They have a healthy output though, good low end response and a nice top-end twang..

The neck was glued and it and the body were oiled as one to minimise inconsistencies between them. I intended to stain the body but keep the neck natural, and was lucky that none of the stain bled through to the neck thanks to careful application and a strip of masking tape. On a previous undocumented build, I didn’t allow the stain sufficient drying time. As a result, the colour was dragged onto the neck during application of the first oil coats. An alternative method would be to finish both separately and glue them at a later stage. Though in doing so minimal finish should be applied to the surfaces to be glued as the finish can affect the adhesion of the glue.

The fit of the neck to the body is excellent, a testament to the care and attention shown in machining. Before finishing I masked off the fretboard, and added a curve to shape the end of the headstock.

The neck and body were then sanded to 180-grit before the staining process. This guitar ended up being finished twice, as on the first go I mistakenly sanded to 320-grit which is too fine a finish for the stain to soak into the wood. Thus the stain dried on the surface and had the effect of sealing the wood, preventing the oil from penetrating. It too sat on the surface, the result being a thick finish full of imperfections and with a rough, tacky texture. Both the finish and stain came right off with a lot of machine sanding (from 60 to 180-grit) bringing the guitar back to bare wood of the original colour.

With the freshly stripped wood instead sanded to 180-grit, Several coats of stain were applied, black on the back and blue on the front, blending the two at the edges. It was then left for several days to dry thoroughly before oiling.

The stains are from Crimson Guitars’ ‘Stunning Stains’ range. Royal Blue and Black were used and applied as per their instructions with a square-folded rag.

The oil is also from Crimson. A sealer coat of guitar penetrating oil was applied after buffing to 320-grit and left to tack off before being wiped dry. Initially, high-build oil was used from then on, applied with a cloth for the first few coats and later with sandpaper, beginning with 1500 grit and moving up to 3000 grit, which was the finest I had to hand. I wasn’t impressed with the high-build finish and the way it blended with the stain.

On the second go the penetrating oil was used which worked a lot better. High-build might work for a natural wood finish but didn’t work for me in this case. Latter coats were applied with sandpaper, the first few applied with a cotton cloth and wiped dry once tacky.

After it had fully dried, the texture of the finish left a lot to be desired. A few coats of wax improved matters though left some rough areas and a tacky feel. I ended up using a combination of t-cut and lacquer polish and a buffing machine after gently wet sanding the finish to 2500 grit. This worked a treat and resulted in a finish that I am happy with, though I don’t intend to repeat a stained oil finish any time soon. Perhaps there was an issue in my method or a reaction between the oil and the stain. I’ll stick to nitrocellulose where colours are required, though may use oil again if an instrument is to be left natural.

The bridge posts were then knocked into place and the rest of the hardware and electronics fitted. I strung it with Coban’s MCG4 electric strings which I decided to trial primarily on price. They have far surpassed my expectations in both sound, durability and playability, and work well on this SG which is setup with a low action.

The SG plays well and sounds nice with the classic rock tone I’d been looking for. It’s great for fast fretwork and heavy power chords alike. I do prefer the feel of a Strat or the weight balance of something like a PRS or semi-hollow Tele, but that’s just personal opinion. But it’s a great guitar and one I look forward to playing for years to come. 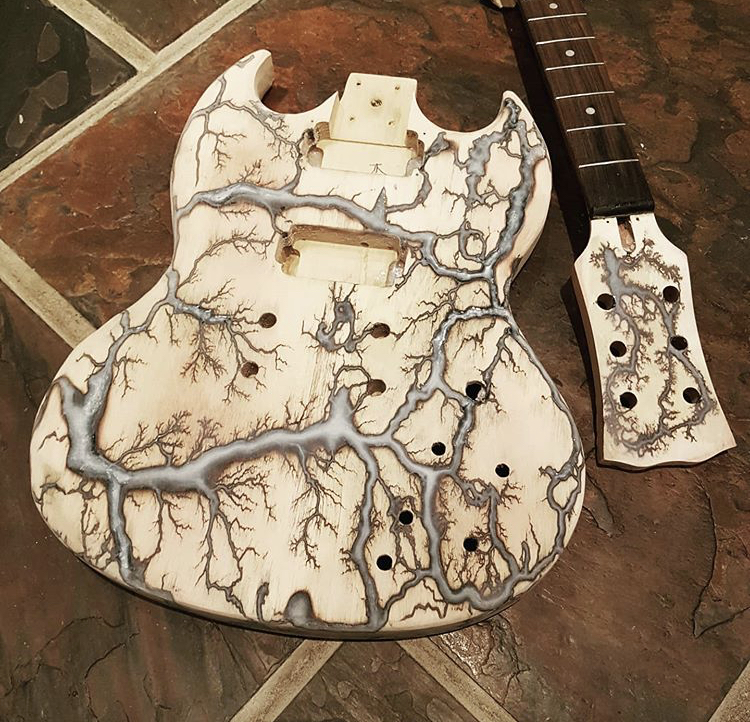 14 DAYS GUARANTEE BACK UP

Coban Guitars are working as normal from home. During such a special difficult period, all stock products are being dispatched the best we can. Dismiss

× How can I help you?
WANT 5% OFF?
Sign up to our mailing list and receive these benefits below. 5% off all orders. Free Next Day Delivery to Mainland UK on orders placed before 6am Mon - Fri (Stock Dependent). Orders placed on Friday will be delivered Monday. Free wood veneer samples on selected Guitar DIY Kits. Subscribe now to get free discount coupon code. Don't miss out!
Follow us
SUBSCRIBE
I agree with the terms and condition
unsubscribe anytime.
Coban Guitars is fully committed to respecting your privacy, and protecting any information you provide. We only use information you provide to process orders you may place at a Coban Guitars web site, notify you when important changes are made to our service, OkPrivacy policy